For those of you who don’t know, I’m located smack in the middle of the area that just got bitch-slapped by Hurricane Sandy [sidenote: I have always, always hated the name Sandy.]. We got very, very lucky: no property damage, we never lost power, internet, or cable, no flooding. Many of our friends, extended family, and neighbors weren’t so fortunate.

Don’t get me wrong — we’ve been inconvenienced plenty…my darling children haven’t had school for a week and the bloom is quickly coming off the stay-at-home-mommy rose (seriously, homeschooling friends, I have no idea how you do this)…we can’t really go anywhere due to dangerous roads…grocery stores around us have very low stock on perishables… my paycheck didn’t get deposited due to the timing of the storm…but these are truly minor inconveniences compared to the losses and devastation those around us have gone through.

I’m releasing a new hat pattern today, Haimish. 100% of all proceeds for the month of November will be donated to a relief fund for those affected by Hurricane Sandy.

Haimish is a Yiddish word meaning “warm and comfortable; homey; folksy.” Easy to knit and wear, this comfy hat exemplifies these characteristics. Offset cables surround the hat, topping off the thick rib and rolled edging. It is rustic simplicity at its best. Offered in three sizes (child, adult small, adult large) for the whole family.

18 stitches and 22 rows = 4″ in pattern. Please take time to check your gauge, as this helps to ensure a successful project.

You can purchase the pattern online from Ravelry.com (you do not need a Ravelry account to purchase).

Three things happened to me yesterday, directly related to my designing of knitted things. Two are super awesome, and the other one not so much (and the lack of awesome there is exacerbated by it being avoidable):

Thing the first: I received notice that a submission I sent out a while back had been accepted. YAY! Emails of that flavor always give me a good 10 minutes or so of pure, unadulterated happiness before I start organizing and moving things around on my schedule and updating spreadsheets and whatnot. And even after the organizing part starts, there’s still a happy little glow there from the acceptance.

Thing the second: Jane Austen Knits Fall 2012 hit newsstands, and I received a note from a lovely woman asking me to please add my Maiden Fair Blouse pattern to Ravelry, as it was so beautiful and she’d like to add it to her queue. Done! A few notes about the Maiden Fair Blouse:

Slightly puffed sleeves, a low-cut neckline, and empire styling under the bust all evoke Regency-era fashion. Like many of Jane Austen’s characters, this little sweater has a sweet girlishness but also a hint of sophistication and elegance. The lace rib of the bodice is reflected in the detailing of the raglan sleeve shaping and easy ruffles adorn the edges.

It’s worked in Rowan Cashsoft DK, which is lovely both to look at and use. I really want to make one for me, if I ever have the time. Much like the cobbler’s children, I’m quickly finding that the designer never has cute new sweaters for herself. [Note to publishers: This is totally a problem I’m okay having.]

Thing the third: I tried on the sweater I’ve been working madly on (for self publishing! Finally a sweater for ME!) the past couple of weeks to check the armhole shaping…and discovered the chest measurement was way, way off. Let’s talk about this a minute, because I really have no one but myself to blame here. I mean, clearly my swatch is a filthy, filthy liar, but I know better by now than to ever fully trust a swatch.

I had a feeling while I was working the ribbing that it was going to be a bit wide, but I decided to ignore it/hope for the best/pretend it was all going to be fine once I was working in stockinette. THEN, I somehow never got around to actually measuring the width of the sweater (I’m blaming this on the fact that I was, at that point, determined that it would be my Rhinebeck sweater, which clearly didn’t happen anyhow — god, can you imagine how pissed I’d’ve been if I actually had managed to finish the thing for the show only to find it didn’t fit?). So I really could have saved myself a lot of heart/finger ache here, if I’d only a) trusted my instincts and/or b) actually taken a moment to check that I was on track. Sigh. At least it’ll be faster to knit it back up once I lose the extra stitches, right?

I’m going to put this one aside for awhile to focus on a couple of submissions and a super cute hat that should, in theory, be ready for release next week, but then I’m going to jump right back to it as, fit issues not withstanding, I think it’s going to be fabulous when it’s done properly.

Star light, star bright
First star I see tonight
Wish I may, wish I might
Have the wish I wish tonight

The enormity and magnificence of space has always struck me right to the core of my being. From the time I was a little girl, I remember looking up at the night sky with a tremendous sense of wonder and awe. Back then, the space program was in full swing, and Sally Ride was an astronaut, and it didn’t seem completely impossible that maybe someday I could fly among the stars. Then I grew up, and dreamed different dreams, and wished different wishes, and settled into my life on Earth…but I still get a tingle when I look up into the night sky.

My favorite of all the constellations is Cassiopeia…the beautiful but vain Aethiopian queen who incurred the wrath of Poseidon and was punished by being tied to her throne for eternity, placed in the heavens in such a position that for half the year she is sitting upside down. This shawlette is based on the shape of her constellation, an asymmetrical “W”. The garter lace of the main body forms tiny star shapes between the eyelets, and the lace border on the bottom edge evokes the shooting stars that are traditionally wished upon even after the first star of the night has passed. 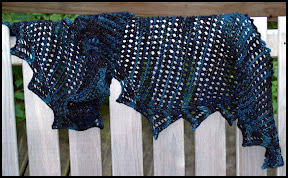 Wish I May is now available on Ravelry.

You are currently browsing entries tagged with Ravelry at Tasteful Diversions.